We're used to thinking about music as a one-way interaction: music influences us. It affects us in many ways, whether by lifting our mood, helping us relax, or whatever else it might be. Our mental state changes (sometimes drastically) when we listen to a song, but a song sounds exactly the same every time we listen to it.

Let's pause here - why would I write that? It seems obvious that a song always sounds the same, that's literally how recordings work.

But what if music was a two-way interaction? In other words, what if the music was also influenced by us? This is called adaptive music, which changes in real-time depending on your mental state and what's happening around you. As opposed to a fixed recording, adaptive music is organic and always changing depending on the current situation.

You might be thinking - how exactly does it work? What kinds of signals let the music adapt to you? Is there an adaptive music app to help you focus?

Choosing your own music is hard

To better understand the potential of adaptive music, let's bring back the two levers from earlier in the series. Generally speaking, the optimal state for cognitive performance is moderate arousal and pleasant mood.

Although it may seem a bit simplistic, thinking about just two dimensions makes it far more manageable to assess your current mental state. From there, it's easier to think about how you want to adjust your mental state and what type of music can get you there. But our mental states and energy levels change drastically throughout the day, which means the same type of music won't be effective for very long.

There is clearly a lot of overhead in this process. It involves assessing your current and future mental state, choosing an appropriate playlist, and adjusting the playlist every so often. Adaptive music helps us drastically reduce the effort involved - it can be as simple as choosing the type of task you're working on and the rest is taken care of. The delivered sound will nudge you towards your desired mind state.

How does adaptive music adapt?

As we've described before, adaptive music is generated on the fly based on real-time inputs. These inputs could include both external (e.g. location, weather) and internal (e.g. heart rate, breathing rate).

Common wearables like FitBit or Apple Watch record heart rate (HR), which is highly correlated with our arousal state. The logic of how an adaptive music system would use this signal is pretty simple - we want to avoid a HR that is significantly higher or lower than the normal range, which is 60 to 100 beats per minute (BPM) for most adults.

When we're calm or in a low-arousal state, the music's tempo would rise adaptively to speed up the heart rate until it was in the optimal range for alertness. In moments when our heart rate is too high, the music would slow down. If our HR is in the green zone, the system would match the HR and try to keep it there. In other words, adaptive music would completely handle the arousal lever and probably better than we could ourselves.

With the mood lever, it's more difficult because that aren't easily measurable vitals that correlate strongly with emotion. It's not as simple as differentiating between happy and sad music either, since both can support a pleasant mood. Until adaptive music can respond dynamically to our mood, doing a simple self-report on your mood at the start of a session will have to do.

Adaptive music can also take advantage of external inputs, like location, weather, and time of day. These measures are harder to generalize for, since there are no simple rules for how they might be used. Among the companies pursuing adaptive music systems for cognitive performance, Endel has an interesting approach that revolves around a person's circadian rhythms.

Sound environments that respond to you

Endel is an algorithmically-generated, adaptive sound environment to help you focus, relax, and sleep. Although the 'soundscapes' most closely resembling ambient music, it's not music in the literal sense. It's more of an ever-changing sonic bubble that encapsulates you and drowns out the outside world.

Without the restraints of musical structure, it freely adapts to a number of personal inputs in real-time, including weather, time, heart-rate and motion. The interface is extremely simple - you choose your intended state (focus, relax, on-the-go, or sleep) and the rest is taken care of.

The core algorithm is based on biological rhythms that are highly consistent across all people. The most well-known is the circadian rhythm, or the 24-hour cycle of wakefulness and sleep. It is driven by an internal biological clock and fine-tuned by natural light levels among other things (for more, see this article). There are also shorter cyclical processes called ultradian rhythms, which may regulate daily patterns of activity and alertness. In other words, our arousal levels and, by extension, cognitive performance fluctuates throughout the day.

Shown below is Endel's internal model for the ideal energy trajectory in terms of your circadian (sleep-wake) and ultradian (rest-activity) cycles.

Using inputs like HR and time, it calculates the deviation from the natural cycle of arousal and restores a user's state to the 'normal' level relative to their ideal energy trajectory. The idea is that the properties of the soundscape you hear (e.g. tempo or intensity) will help sync a person's mental state to this ideal rhythm. For example, the underlying tempo of the soundscape fluctuates between about 60 and 120 BPM to tune your arousal.

This might be slightly surprising, since Endel cyclically nudges you towards a more relaxed state even when you might want to be maximally focused. In short, Endel is designed to actively discourage people from trying to focus for hours on end without taking time to recover in between. Their larger mission is to help people make a habit of living in line with their natural cycles rather than fighting them.

Mission aside, there are still many unknowns about its effectiveness for promoting sustained attention and avoiding distraction. Their website features sound masking, which is known to be effective in removing distracting elements from sound, but there are very few details. The Endel team found positive results in a pilot study where participants self-reported their concentration. This is a good first step, but this needs to be validated in a controlled setting and in a more quantitative manner.

The future of adaptive music

Looking toward the future, there is clearly a lot of potential for their technology. Personalizing the energy curve would be a major breakthrough, as a Spotify study shows there are significant difference in baselines across different ages, cultures, and chronotypes.

The growing consumer market for wearable brain monitoring technologies (EEG) is also promising. Recent research suggests that our musical taste can be inferred from our brainwaves. This would mean that an algorithm could tune the music to your preference without you ever pressing a button.

Another startup, Weav Music, created an new audio format that opens the possibility for artists to arrange traditional music to be adaptive and sounds incredible at any speed.

In any case, adaptive music will fundamentally change how we consume music. It will be a game-changer as far as using music to boost concentration and cognitive performance. 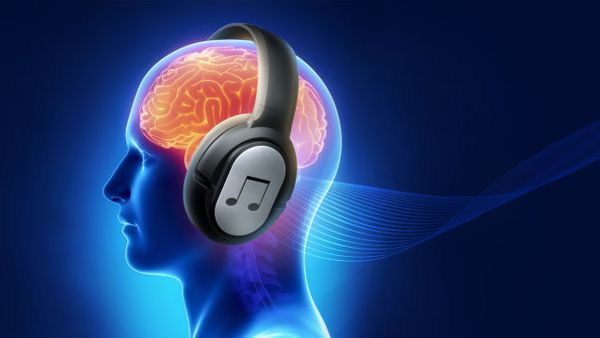 What is the deal with YouTube videos claiming to give you 'super intelligence' and apps promising to get you into a flow state?

Why does music help you concentrate? What makes good background music? How can music be distracting?